This monograph publishes for the first time an overview of the most important actions, performances and series of works from 1979 to 2013. 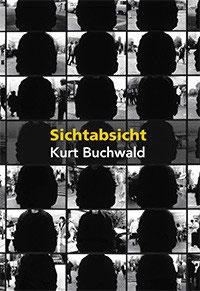 “Kurt Buchwald (born in Wittenberg in 1953) was among the really great rarities in the former East Germany. After the Wall fell, he remained the norm breaker he had always been. Kurt Buchwald is not content to raise questions and take photographs. He intervenes. It is not just that he succeeds in striking an unabatedly urgent tone in all of his projects and exhibition concepts. At the same time, he completely reinvents his language — and thus, one could even say, himself as well — in each of these visual acts. Since 1984, he has stubbornly and seclusively occupied himself with the “view,” his first act taking the form of demonstratively blocking the range of his own view in front of the camera. His activism is protest and declaration in one. There were not many artists in East Germany who so openly and deliberately proclaimed an “anti” — and, furthermore, did so publicly.

In East Germany, there was a yearning for people who did not have announcements, but genuine messages from unconventional perspectives, to share. Buchwald offered new solutions and his statements were intellectually and artistically independent of the posing pundits of the ruling ideological elite. Buchwald played a not insubstantial part in the general transformation related to the societal figure of the intellectual publicly visible through his or her art in the East Germany of the 1980s.

There was no artist in East Germany who used photographic means to pursue a more provocative and extensive exploration of the media, politics, and the self.”