Jaromir Funke (1896-1945) Czech photographer and theorist. Along with Josef Sudek and Jaroslav Rössler, he was one of the most important representatives of Czech avant-garde photography of the 1920s and 1930s. He studied medicine, law and philosophy at Charles University in Prague and at the University in Bratislava, but did not graduate. As an amateur photographer, from 1920 he advocated "pure" photography instead of the traditional refined prints reminiscent of graphics and painting. As a professional freelance photographer from 1922, he was one of the leaders of the young oppositional movement in photography that founded the Czech Society of Photography (1924) and sought to assign photography new social functions. In his work, Funke managed to unite some of the leading trends in European photography between the two world wars, combining constructivism and functionalism with surrealism and social commentary. At the same time, he managed to preserve traditional Czech lyrical qualities. His work was rational, communicative, inventive in design, and emotionally effective. A typical feature is his use of the dynamic diagonal.

In the early 1920s, Funke's work reflected a growing interest in modernist ideas, and he began to make clearly focused studies of simple objects. Later in the decade, he turned to producing carefully arranged still lifes that emphasized abstract forms and the play of light and shadow. He also produced several important series of photographs during this period, including two inspired by the paintings of Eugène Atget: Reflexy (Reflections, 1929) and as trvá (Time Passes, 1930-34). Funke was also influential as a teacher, first at the School of Applied Arts in Bratislava (1931-34/35), which followed a curriculum inspired by the Bauhaus, and then at the State College of Graphic Arts in Prague (1935-44). During his time in Bratislava, he became interested in social documentary photography and joined the leftist group Sociofoto, which was concerned with capturing the living conditions of the poor. Throughout his career, Funke published articles and critical reviews dealing with photography. From 1939-41 he collaborated with Josef Ehm to publish the magazine Fotografik obzor (Photographic Horizon). 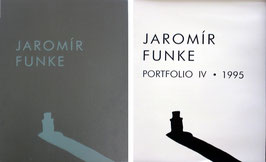