Milos Korecek (1908-1989) belonged to the well-known Czech group of artists Ra of the 1940s, who were devoted to surrealism and developed their own interpretation. He invented by 'accident' a new process, the results of which he called 'Fokalke' (light print) in 1947. Although the fokalkes were made only by Milos Korecek, they are not alone in the history of surrealism. Raoul Ubac in France, Marcel Lefrancq in Belgium made their brulages. David Hare in the USA his chauffages. All three heated or partially burned the gelatin on the photographic plate and enlarged the result on the photographic paper. These experiments were all made independently during World War II. In Korocek's case, the less successful negative plates, often with images of artworks by his fellow artists, were mostly used for focalizing. Although the focalizing was determined by chance, it was not determined by him alone. The other part, that of the artist, only forms it into focal lime, before that it is only a photographically processed plate. The editing process, the selection, the cropping and the interpretation turn the originally only exposed photographic plate into a focal lime. Korecek resisted calling focal lime a photograph, but today it can be called a precursor of concrete photography. We are showing two portfolios of fokalks - Album 10 fokalků pro Josefa and Vánoce, made in 1987 shortly before his death and on view in Germany for the first time. 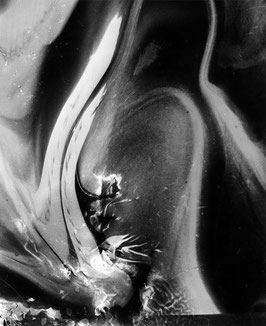 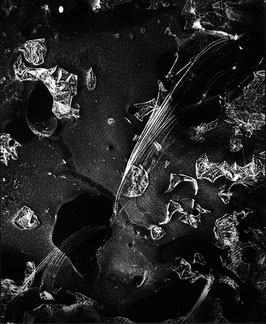