The young Thai artist appears under the pseudonym "The opium smoking white elephant". All that is known of him is that he was born in the mountains in the north of the country. He keeps himself very hidden, like a species threatened with extinction. The starting point for his digital paintings are mostly historical photographs, which are then brought into the present by means of targeted alienation.

The individual works in the different series are named after colors and nuances:

The "blue" series reflects historical events in Thai history starting with coronation ceremonies of the royal family, student revolts, warriors and child soldiers, war elephants and executions... Thus, this series marks the reflection about power, violence, oppression and at the same time the eternal desire for freedom and self-determination.

The "yellow & green" series shows historical portraits and scenes of the old days. Portraits of actors and dancers, weavers and young people playing and flirting…

The „red“ series is about staged portrait - photographs in the studio or in the open air from the 19th century. Here, the role of the photographer is examined as well as the interiors that determine the scenery. The continuum in staging as we see it today with artificial intelligence or virtual reality, these digitally processed vintage photographs as paintings on canvas build a bridge to the present.

The „black & white blue“ series is dedicated to the female Thai beauties who explicitly show themselves on pornographic sites on the internet. The artist wants to give them back their personality and individual beauty with his alienations - and to let the view not only of the nudity, but also of the "beautiful wild ones" and " unspoiled" come to light. His great role model are the French painters Paul Gauguin and Gustave Courbet, as the titles reveals. But there are also references to the Irish painter Francis Bacon. 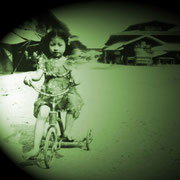 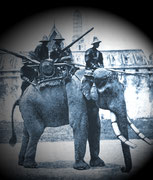 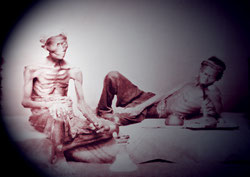