Roger Humbert (born in 1929) is a Swiss pioneer of concrete photography which has produced an extensive photographic oeuvre since the 1950s. Humbert worked in the darkroom until 1974 only with light sources, form elements such as stencils, punch cards etc. and the chemical process of development. The mysterious quality of the light that is drawn into the sensitive gelatine was not directed at extra-illustrative motifs, but at the form and structure of the photo itself, and helped this type of artistic photography to gain international recognition.

Humbert's experimental photography is closely related to art movements such as vorticism of an Alvin Langdon Coburn of the 1920s, the Bauhaus tradition with László Moholy-Nagy and the philosophy of existence of Jean-Paul Sartre. His camera-less photograms, luminograms and clichés verres do not depict, but show a new reality created at the moment of exposure on the photographic paper.

Humbert was represented in many important exhibitions, including Nonrepresentational Photography (Ungegenständliche Fotografie), 1960 in Basel and the first exhibition entitled Concrete Photography, 1967 in Bern. Together with the photographers René Mächler, Jean Frédéric Schnyder and Rolf Schroeter, he showed minimalist light compositions that were based solely on their own internal laws. Humbert is thus one of the founders of this movement and is one of its main representatives in Switzerland.

In 2005 Humbert began to continue his knowledge of photography in the digital world. For him, this completes the circle of his more than 60 years of work from camera-less photography to concrete digital photography. The latent image was always in the center of attention. The key works of his new group of works are united in the exhibition.

Since 2002, Roger Humbert's oeuvre has been held at the Fotostiftung Schweiz (FSS) in Winterthur. His works are represented in numerous international museums, including the Peter C. Ruppert Collection in Würzburg and the Musée d' art et d' histoire in Geneva. 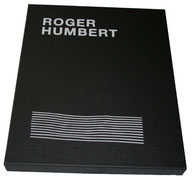